Space data depending on zone

I have a space A that is included in two zones, M and N. In zone M the space has room number 1, in zone M it has room number 2. How would you structure this in IFC?
a) multiple PSets (hard to identify when there are many zones)
b) classification (not enough and not customizable metadata available)
c) connected intermediate proxy (depricated?)
d) additional SpatialZone / Zone for each room (lots of duplicates)
e) IfcAssets (M.A and N.A could be considered as two assets to be managed slightly differently)

My wish would be to go for IfcSpacialZone in this case, if you mean that Space A is a single entity that sits in Zone M and N, respectively touching both of them.
But it might be a bit difficult, knowing that IfcSpacialZone is a case being currently developed (Link). In addition, some software such as Archicad are still not capable of using this entity correctly (even though it exists as an option). I am not sure about other software tools.
According to the IFC4 documentation the IfcSpace would have the relation with the IfcSpatialZone via IfcRelReferencedInSpatialStructure, hence nicely structured in IFC.

This is one of the purposes covered within the defined Clusters by the IfcSpatialZone Project.
There are different videos of the project showcasing those clusters.

Stay tuned to the topic during the bSI Summit or through any project member, like myself.

This use case is something that was tackled quite some time ago… IFC2x3… where it was recognized that a Space could belong to multiple Zones simultaneously, as long as each Zone system was unique. So, a Space could belong to a HVAC (Zone A), a Security/Access (Restricted), and a Leasing (Company XX, Department D) Zone… much like attaching multiple classifications. If I recall correctly, back in 2008(?) we (Vectorworks, Revit, Microstation, Archicad) were applying this to the US General Services Administration BIM uses cases and BIM Guides.

Is this capability still not true?

As an Archciad user I can confirm that the entity also exists in the newer versions of the software. 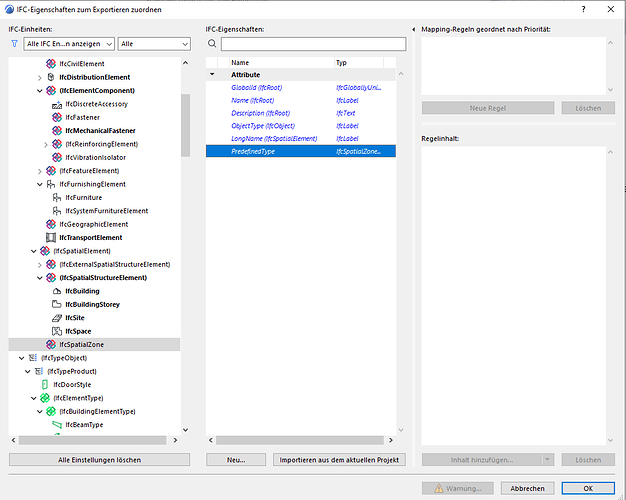 Even though the entity exists, it is not applicable to any use case…
Maybe @hkreienbrink could shed some light about its intended implementation?

Does that not suffice? That is the proper way to assign spaces to multiple use groupings, not IfcSpatialZone, which is a hybrid of IfcSpace and IfcZone…

… so I’m not sure I fully understand what use cases this is supposed to solve that the previous IfcSpace and IfcZone did not.

The assignment to different zones is not the problem. The difficulty is that the room has different “identities” in both zones. So I either need special psets (each indicating the zone it refers to, like A_PsetZoneMInfo), special properties (NumberInZoneM) or two proxies that refer to the same room but add additional data (a zone / spatial zone for just one room then).

@TZwielehner Ah… right. Yes, in the case of the GSA, I believe we did have to create custom Psets. Not elegant, but seems to be the best way. Proxies are really a mechanism of last resort.